I wonder if Wakanda still holds the #1 sales position of Axtone. At least it was until 2014.

Paradigm? really? why do u say that?
And Wakanda didnt had a thread in the forum...

I guess most of the people who hated it never heard this beast live
"You showed us, and the world, that Paris is much more than the Eiffel Tower and Mona Lisa..."
Axwell, Bercy @ Paris, Saturday, December the 8th 2012.

Wakanda was probably the first of many tracks with that similar drop, when things got really bad:

"For the love of god, can you say INSERT, woman!"

The sequel to Wakanda... Well, it's a lot worse! Wakanda is somehow way above this
"You showed us, and the world, that Paris is much more than the Eiffel Tower and Mona Lisa..."
Axwell, Bercy @ Paris, Saturday, December the 8th 2012.

When you look now on the beatport the first is This Time, second is Something New and third is Paradigm. And sales for the all time according this site: http://www.beatstats.com/label/axtone-r ... ime-genre0 are: 1. Sunrinse (Won't Get Lost) 2.I AM 3.Wakkanda

'In the words of Hard Rock Sofa & Swanky Tunes – “Here We Go” – Your first GUEST recap for Axtone Ten!

There are many lalaloopsies with nursery rhymes about the history for my track ((Manitou - In Africa, Derb - In Africa, Dimitri Vegas & Like Mike in Africa, Martin Vorwerk/Garrix in Africa… but your MAIN man here really knows what went on.
In the SIXTH war against Ubuntu (Battle of the Bulge) : I was just a poor boy, I needed no symphony [ala Bohemian Rhapsody], but I whistled tunes while I hunt manikou in Woosta-Town (?). If you’ve never seen a manikou- Google it now, guys! This manikou was TRIFLING, my brothers: it taunted my sister & mother with these voices:

Luckily I slaughtered the manikou (TORE him APART like Adrian Lux by wrapping my ARMS AROUND HIM!!) I recorded this manikou’s voice with a boombox & keep it for inspiration.

One night though, guys, my lady friend Nanchang Nancy & my wifey TriniFam saw THREE brothers steal this boombox from my teepee. It took my six months to reboot Jugwan’s laptop, but eventually Google showed me these bros’ names: Dimitri Vegas, Like Mike, & one man who look like a GHOST [PRODUCER] (Martin Vorwerk}. They busted up my track for the first Axtone release in 2013! Oh father….

‘NOW, Vegas & Mike have their THREE release for Axtone (“Rotterdam City of Love’ remix –AK(47)A The Vinelli Anthem- & ‘One Look’ remix with Axwell himself)…AXTONE TEN - Post (Wakanda Edit) :: It was actually their fourth release if you include LEAN THE GIRL’S BEHIND/LEAVE THE WORLD BEHIND (Vegas & Mike Dark/Black Forest Cake edit))
Thank you to Jens Gronberg for at least putting my beautiful face on the Axtone cover. My Axtone debut! Notice you all heard it first Live on Swedish House Mafia’s ‘ONE LAST TOUR’.

It may not be THINK ABOUT IT, FEEL THE VIBE, THE FIRST REBIRTH or LEAVE THE WORLD BEHIND, butt I hope you show some respect for this track. Do us a favor---the unofficial remixes by Wolfpack & Zatox don’t go down right, don’t listen

AXFACT: ‘WAKANDA’ is the favorite track for Russia’s Czar, Vladimir RASPOUTINE/PUTIN (no guys, he’s not Canadian!)

Luckily I slaughtered the manikou (TORE him APART like Adrian Lux by wrapping my ARMS AROUND HIM!!) - hahahaha that's a good one!!

The beginning of 2013 is quite hard-hitting, to say the least. Starting with the most brutal track Axtone has ever released, 'Wakanda', and then following with this behemoth.

After a handful of appearances, 'Rasputin kinda confirmed Hard Rock Sofa as part of the Axtone label for me. I think it was around this time that they were named on the website as official artist signings, alongside NO_ID and Axwell himself. I've got to admit that me too had to get used to these more aggressive sounds, but looking back I don't think we could have gotten a better name to fill this particular slot for Axtone than the Russians. Apart from delivering that punch Axwell was looking for to cater to the general vibe of that time, they delivered that 'punch' in a highly creative and polished fashion. Rasputin is another example of just that I think. It did something different and did it extraordinary well.

The track is named after the Russian historical figure, Grigory Rasputin, which life is absolutely clouded in mystery. Some called him a Holy man, some called him 'The Mad Monk'. Either way, you can say that he was quite the spiritual man, strongly connected to mythology of all sorts. The biggest mystery around this man is definitely his death. Of course I did a little googling, and I found this to be a rather interesting read:

'When Prince Felix Yusupov invited Rasputin to his home on Dec. 29, 1916, it wasn't for pleasantries. Married to the niece of Czar Nicholas, Yusupov plotted with a group of nobles to murder Rasputin in an effort to save Russia from imminent collapse.

Since the details of the night rely on eyewitness testimony, disputes have arisen regarding what exactly happened. Generally, historians believe that the prince wooed Rasputin to his home with the prospect of meeting his attractive wife. Yusopov laced pastries and wine with enough cyanide to poison several men. However, after Rasputin arrived and began eating and drinking, the poison had no effect, and Yuspov panicked. Determined to end Rasputin's life, Yusupov pulled out a gun and shot Rasputin, striking him in the back [source: Yusupov].

After Rasputin fell to floor and was presumed dead, Yusupov and his friends celebrated upstairs. A little later, Yusupov checked on the body. The prince checked the pulse, feeling no sign of life and even shook Rasputin. Somehow still alive, Rasputin opened his eyes, which Yusopov described as the "green eyes of a viper" [source: Yusupov], and he attempted to escape. Yusopov and his co-conspirators chased Rasputin out into the yard, shooting him two more times and beating him with a rubber club. To ensure he didn't rouse again, the men tied Rasputin in a blanket and dumped his body into the Neva River.

Adding another layer of mystery to Rasputin's death, his body was found with his right arm outstretched, presumably to make the sign of the cross, indicating that he was still alive when he hit the water and managed to partially free himself [source: Wilson]. The autopsy report listed hypothermia from the freezing water as Rasputin's cause of death. However, the autopsy also revealed that he had been shot in the forehead, leading some to believe that he must have been dead before being dumped in the Neva River [source: Moynahan]. Interestingly, it showed no evidence of poison in the body.' 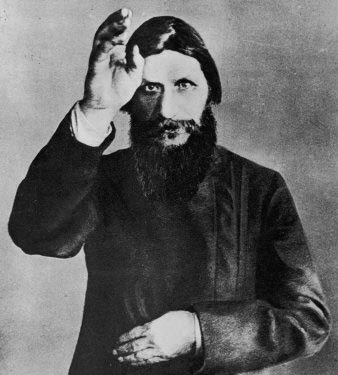 Eerie to say the least...

The artwork naturally has a strong Russian vibe, but a surreal look to it as well due to the 80's esque astronaut/desert. Perhaps Jens played into his mysterious figure a bit? Who knows...Nice colors though

Btw the story of Rasputin is weird as hell haha
"You showed us, and the world, that Paris is much more than the Eiffel Tower and Mona Lisa..."
Axwell, Bercy @ Paris, Saturday, December the 8th 2012.