AXT015 Axwell - Nothing But Love

A little less B O O M than I hoped for.

Come on Ax! Put a release date on this track now before people get tired of it! (Even though it's hard to get tired of it). That's exactly what happened with Steve Angello's track Monday.
Nothing But Love

i hope he wont hurry the release

i mean this one isnt that great since its not finished...i know he will turn it into something much better!
check http://mkc-house.blogspot.com/ for mixes

daherbst
Administrator
since 2008
Posts: 1946
DJ Gear: all about Pioneer 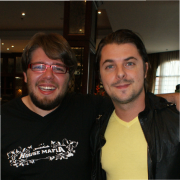 I know this sounds stupid, but, have you read the facebook mail that Ax send to his fans like a month ago?

The other thing, I've noticed that Axwell's playing NBLFY live a lot of times, I headr it here in Bogotá, and I'm pretty sure he played it in Medellín and Cali (the two other Colombian cities)

Anyone knows if he played with SHM in the WMC?
⇧
⇩