Axwell - Center of The Universe

It's station in Poznan. Some footage from "We love Swedish House" and from other places.


how is this COTU acoustic mix called?
say insert

This bootleg by Jose De Mara and Abel Ramos is really good. Nice groovy vibe to it!

There still isn't any studio acapella or official instrumental right?

Well there's this official instrumental version, although in my opinion it isn't still isn't as good as Ax's older unreleased versions

I found the remode instrumental in Spotify few days ago. http://open.spotify.com/track/0kPw4w2pXmT6wkoqKAng47

I got the whole collection if anyone needs. Including DnB remixes on other folders... 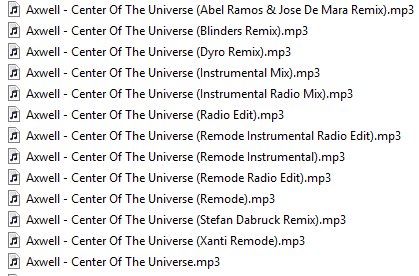 hedz wrote:I got the whole collection if anyone needs. Including DnB remixes on other folders...

Could u send me instrumental versions of both Original and Remode version, not radio mixes but full tracks...?!

hedz wrote:I got the whole collection if anyone needs. Including DnB remixes on other folders...

I would also like the full instrumentals of the original and remode tracks!